Hey everyone, i'm squirrel. a full time fashion designer / "sometimes" a cartoonist living with her husband "the caveman" in san francisco.

Hope this blog will give you an idea of how a fashion designer like the squirrel creates her own tiny lil new collection and also how she expands her brand to the world.

Well, let's start from how I got the inspiration for my new collection.

Sometimes designers don't have any inspirations and just start sketching their designs but I really need something which becomes a back bone of my collection all the time. I am a bit of a philosopher through my entire life and just trying to translate it to fashion.

One day, I accidentally had a chance to see a tiny art called illuminated manuscript. I was especially attracted by the ones which were hand-drawn one by one in the medieval era. 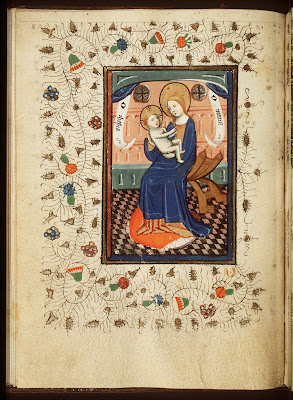 A monster comes up to the squirrel!!! It almost looks like the squirrel gets attacked!!! Then squirrel yells at the monster..."caveman!!"

.....yes, they are the caveman and squirrel in the medieval version. the squirrel's job is making a copy of the bible by hand in the dark castle....it sounds like kind of a sad job but don't worry, the caveman and squirrel had kinda good time in the old castle like they do in their tiny nest now. They even looked down the people from the top of the castle having pizza and making some funny jokes...They were dark heroes.

Anyway, I started collecting the pictures, and while I was watching the pictures, the word "devotion" came up to me. It might be the most happiest and also the most saddest thing to give up indivisuality or "myself"(?) and just dvote their lives to the god or whatever the belief they have.  What a sad purity and a melancholic relief...